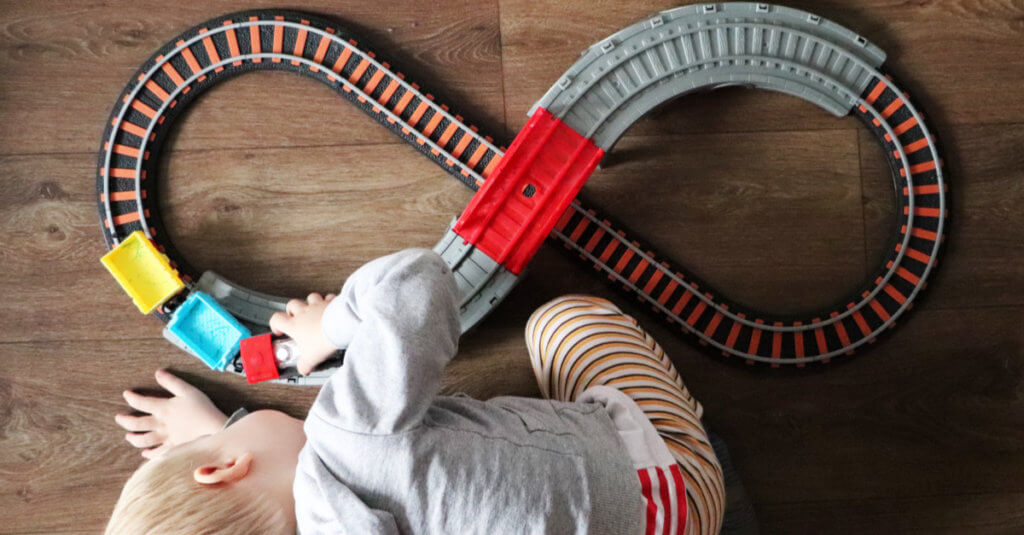 Don’t get me wrong. I love playing with my daughter! Her imagination absolutely blows me away and leaves me laughing until I cry most days. But. But. That doesn’t mean I want to serve as her primary entertainment 24 hours a day. Is it really that terrible of a thing to want to stop entertaining your toddler 24/7?

After nearly a year of trial and error, I finally realized the secret. Encouraging independent play isn’t about assigning our kids play tasks to take up time, but about teaching them to come up with their own entertainment that they’ll enjoy. And this is a skill that will last them a lifetime!

My daughter is four now and can entertain herself for literally hours. She dresses up in costumes, makes piles and piles of art, role-plays with stuffed animals, and even puts on her own “movies.”

Now that doesn’t mean I’m not a present parent or that I don’t spend a little time playing with her one-on-one every day. But it does mean she doesn’t need me to entertain her, or even to suggest what she should do to entertain herself. And that is a life- and sanity-saving skill for both of us.

So how can you stop entertaining your toddler and teach them to happily entertain themselves? Here’s how we got there!

Stop Entertaining Your Toddler Out of Habit

Around the time she turned one, my daughter and I started watching an episode of Sesame Street together first thing every morning. Then one morning, I got caught up doing something and forgot to turn it on.

Did she throw a fit? Did our house immediately catch on fire? Nope, she played with coasters for a good 30 minutes before realizing what had happened and requesting her show.

I decided to “forget” every morning from there out. Sure, some mornings she would ask for Sesame Street right away. But other mornings, she would play for hours, forgetting about Elmo altogether.

Don’t assume a need and automatically fill it. Wait for your child to request entertainment.

Don’t jump in the second you think they might need help.

But this is another area where we shouldn’t assume a need and automatically fill it. If you wait a few minutes before rushing in, you might just be pleasantly surprised to hear your child resolve their issue all on their own. This gives them invaluable practice at conflict resolution and builds their confidence knowing they can resolve issues without involving you every. single. time.

Stop Entertaining Your Toddler By Handing Over Leadership

When your child does request assistance, try asking questions and guiding them rather than simply addressing the need yourself.

Yes, it’s much easier to just fix the block tower yourself. But if you take the time to ask questions like, “Why do you think it fell over?” and “What could we try differently this time?”, your child will begin to ask herself those questions the next time her tower falls. Ask and guide them enough, and they’ll eventually begin to walk through that process themselves, no assistance required.

Act as a play “supporter” rather than a play director or equal.

When you’re feeding your child the script for role play or instructing them as to exactly what to draw and how, they will come to depend on you to call the shots for the next playtime. Instead, follow your child’s lead. Allow him or her to decide what to play and how to play it, with you simply following along. Doing this creates confidence in your child’s mind that they are capable all on their own and don’t require your direction or assistance.

Project confidence in your child’s ability to play independently.

Our kids tend to mirror our confidence (or lack thereof) in their abilities. If you act as if playing independently from momma is no big deal, that it’s common, safe, and loads of fun, they’ll be more likely to follow suit.

So avoid long conversations, full of apologies and sad faces, about why your child has to play on their own for a bit. Announce it once, with confidence, and then act on it.

Stand strong against the resistance!

As with anything new, there’s a likely chance your kids will resist your new stance on entertaining themselves. There might be tears, pouting, or even a full-blown tantrum.

You’ll have to find a way to be okay with that. Because the second you give in to that pouty face and resort to playing “princess” for eternity, they will have learned exactly what to do to get their way the next time.

So stick it out, momma! You’ll experience less of a resistance every time you do it, until there’s no resistance at all. May the Force be with you!

Stop Entertaining Your Toddler By Building Up To It

If your toddler’s current status is #leachlife, simply throwing them in their room for an hour is just not going to work at first. Instead, build up to it!

Let them know in (short) advance that they’ll be playing on their own for a bit, keep your time away to a minimum, and come back exactly when you said you would. On the dot!

Once they’ve mastered five minutes alone, bump it up to eight, then ten. You’ll be building their confidence and stamina with every independent play session.

Start with parallel play if necessary.

While I’m at work a short drive away, my husband finds himself balancing watching our daughter and knocking out work of his own in his workshop. Parallel play is often their solution. He works with his tools at one workbench while our daughter works with her own “tools” at another bench beside him.

Hand your child a video game or movie that will eventually end, an electronic toy with limited activities, or even a craft with specific instructions, and they’ll be back at your side the second their activity is complete. Instead, consider providing them with general craft supplies, blocks or legos without instructions, dress-up clothes, or sporting goods, and there’s no longer a definitive end to their play.

Of course, that doesn’t mean they’ll play independently for eternity (although I could get so much done if they did!). But it does mean you’re not helping to set a time limit on independent play. Plus, it opens the door to creative thinking and more play options!

Regularly swap out toys to keep things new and exciting.

If you played with the same toy for eight hours a day, you would eventually run out of new and interesting ways to play with it. Our kids are no different.

Divide their toys and books into two to three “batches” and only keep out one batch at a time. When it seems they’re running out of steam with one batch of toys, whether days or weeks later, put those away and bring out a new batch.

If your child is old enough to participate, create a boredom jar together. Decorate a jar or box or whatever you have on hand, and fill it with their own suggestions of fun things to do the next time they’re bored. It’s easy enough to turn down mom and dad’s suggestions of ways to pass the time. Children are (at least slightly) more likely to act on what they consider to be their own ideas.

Stop Entertaining Your Toddler By Being Mindful and Patient

Practice being more attentive to your child throughout the day.

The truth is that our kids are just looking for our time and attention. I’ve found that when I’m listening more closely to what my daughter has to say throughout the day, rather than brushing her off or shooing her away, she’s not nearly as needy for my attention. She’s more confident to venture out on her own when she knows I’m there when she needs me and that I always hear her concerns.

Don’t attempt to stop entertaining your toddler unless/until you have the time and patience for it.

This can be a challenging and frustrating process, very similar to transitioning a baby to their own crib and room. If you’re frustrated and stressed, your toddler will mirror those emotions, and the whole thing will feel miserable fast. I strongly advise against starting this initiative in the middle of an extra stressful week or month.

Fantastic news, my friend – you can absolutely stop entertaining your toddler all hours of the day! By minimizing the urge to step in and control, projecting confidence, warming up slowly, and encouraging creative play, you’ll be well on your way to raising a more independent child.

What tricks have you found to stop entertaining your toddler? Be sure to share in the comments!

P.S. Expecting a new baby? Be sure to check out and download our free new parent pack here!